This hop is off the hook. Comment here–with your favorite cold weather fantasy–for a chance to win one of the great prizes below. Be sure to check out the other blogs participating for other opportunities to win!

Brought to you by Spanking Romance Reviews & The Saturday Spankings Blog!

My favorite cold weather fantasy? So, I’m staying in the blizzardy midwest right now, and I suspect my fantasy might change the minute I get back to Austin…however, at the moment, my favorite fantasy is snuggling in front of the fireplace, after a long, hard pounding, exhausted and happy and warm. 🙂 Simple enough!

Here’s the rules for this blog hop:

Follow the links to read the blogs–comment on the blog to prove you were there (or answer the participant’s specific question, if they have one). COPY AND PASTE COMMENTS WILL BE DISQUALIFIED! Each comment earns you one entry for the grand prize. You must provide your email address for your entry to count. Individual pages may also have their own form of entry (Rafflecopter, etc) for additional chances to win prizes. Enjoy all the free stories, posts, & fun!

Hope everyone is staying nice and warm!

Check out the other participating blogs here!

p.s. For ease of the folks running this giveaway, I won’t respond individually to your comments here. 🙂 I’ll read ’em all though! 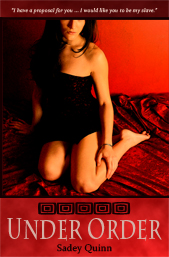 I’m doing one last promotion for Under Order before pulling it from the special Amazon program and publishing it with other outlets. If you want a free copy, head on over to the Kindle store and download it. 🙂

Someone asked me, in regards to the promotion for Cream of the Crop: Disciplined Sex, why authors/publishers give their books away for free.

There are a few reasons, but it mainly boils down to the simple fact that I need readers in order to have readership!

Last night a new, kind of hysterical review for Under Order showed up on Amazon. I like it. A lot.

OMG, HOT, HOT, HOT.
Any wannabe `subbie’ should read this first and be sure they check for details! (never sign anything unread, press for answers, etc.)

Social Service will be free August 26-30.

Spanktastic will be free August 31-September 4.

If you wanna help an author out, click the “like” button under the title of the book on Amazon. And of course, reviews and feedback are always amazing.

Just joining us? Go to the beginning of the account: Two Nights With Mistress Tracy (Part 1)

I slid out of the coat. We drove for about fifteen minutes in complete silence. Mistress Tracy was probably happily imagining the ways in which she would torture me. I was nervously anticipating the exact same thing.

I haven’t been to many ‘sex shops’ in my life, but the ones I have been to are what I would nicely describe as dingy. Dusty shelves filled with cheap, plastic-encased vibrators. Hanging wracks of poorly made overpriced costumes that surely wouldn’t last for more than a few wears. These are the images that fill my head when I think of ‘sex shops’. Nate and I usually order our toys online from reputable dealers.

We do not buy them in grimy stores.

So I was less than enthusiastic about our field trip. When we pulled into a fancy-ish strip mall in a nice area of town, I looked at her, surprised.

She parked as far away as possible, then led me across the parking lot to the store. Her, fully clothed in appropriate black slacks and a green sweater. Me, the tramp of the hour.

Paddles and straps lined the wall. Restraints of various materials—leather, metal, tape, etc—filled the shelves. Leather and vinyl wear, along with costumes of various sorts, were on hangers and dressed on mannequins.

“How did I not know about this place?” I whispered as we walked around in mostly silence. There was just one other couple in the store. Besides them and the young man who sat at a desk near the back, we were alone.

“It’s pretty new. I told Nate I’d take you here and we’d check it out. I’ve never been, either.”

I was flooded with relief when I realized that this might not be a shopping trip. We were just checking out the newest toy store in town.

I heard a whack of a paddle against skin and peeked around the aisle to see the couple testing out a few of the spanking implements. They were both around thirty and attractive. The woman wore a short skirt and was bending over with her hands on her knees. The man was turning the paddle over and testing its weight. Then he patted her butt and gave her another good whack.

“Ouch!” she cried. Her hands flew to her mouth and she turned red. I could tell she’d been hoping to take the spank in silence.

I turned to Mistress Tracy and saw her lips curl into a cruel smile.

This was not good.

“That packs a punch,” she said loudly as she approached the couple. Mistress Tracy is not a shy woman. She boldly walked up to them and took the paddle from the man’s hands. “Come here, Sadey. Let’s see how it feels on you.”

The man was clearly intrigued. His girlfriend or wife or whatever she was tried to stand up to watch but he gently pushed her back to position.

I bent over beside her and shot her a worried, sideways glance. She gave me a small smile.

Mistress Tracy gave my butt a good smack with the paddle.

“Watch your mouth,” she said before whacking me again. Then she handed the paddle back to the man and said, “I like it. Nice weight to it. C’mon, Sade.”

My face was just as red as the submissive woman’s beside me and I gratefully stood and scurried off with Mistress Tracy.

We left without buying anything—neither of us really need any more toys—and she drove us back to her place. There, Mistress Tracy got cross with me when I did not immediately strip out of my whore costume when we entered her house.

“What did I tell you about what slaves wear inside?” she snapped.

I saw a sheen in her eyes that made me shiver. Her evil glare combined with her tone made me instantly nervous. And, admittedly, excited. I pulled off the outfit and the shoes and stood naked near the front door. Ready for a quick exit, if necessary.

We went to her bedroom again, then to her bathroom, and she turned on the shower. “Get in,” she said.

She let the water run cold for a full thirty seconds, pushing me directly under the shower and laughing at me when I yelped and shivered. I watched her undressed but could barely pay attention. I really, really hate cold showers. Finally, she said, “All right. Make it warm,” and she got in the shower with me.

I have never showered with a woman before and I rarely shower with Nate, so this was an odd experience. Also, I distinctly remembered her hair being wet when I arrived at her house that morning and I couldn’t help but wonder what she was going to do to me in the close quarters of her bathtub.

“Wash me,” she commanded, handing me a sponge and soap. I obeyed, of course, and took my time washing every part of her. I washed her pussy last, rubbing her as sensually as I could with the soapy sponge, and she handed me the hand-held shower head to rinse her off.

When she was all cleaned, she pressed firmly on my shoulders until I lowered myself to my knees in front of her. She adjusted the shower so that the water sprayed directly onto my head, over my face, and I squeezed my eyes shut to protect them. Using her hands, she positioned my lips right next to her cunt. I could smell her, and in spite of the fact that I’d just washed her, Mistress Tracy smelled like sex.

I tried to lick her but it was more like she was riding my face. She didn’t start slow, didn’t ease in, no… she just held me still and rubbed her cunt all over me. I stuck my tongue out and lapped at her when I could but finally I just help my tongue there, my mouth open, and relaxed while she fucked me.

I could hear her moaning and felt oddly proud of myself that she was getting so turned on by using me. I grabbed her ass with my hands and squeezed her cheeks hard, and when I did that she screamed out loudly and she came, her wetness slicking all over my face.

She stepped back, steadying herself against the walls of the shower, and looked down at me. Water was still running all over my head and my face, and I must have looked like quite a mess. She smiled and I felt relieved.

I’m reading a little erotica freebie right now and had to stop and write this entry.

Sometimes, when we describe scenes, we use dialogue to enhance our descriptions. For example, if a couple is making love in their bedroom after breakfast, we might see something like this:

“God, you are so fucking hot right now,” Pete groaned as he worked his thick erection into Lucy’s tight, wet sex.

“Yeah. Baby, did you remember to turn off the coffee maker?”

This is realistic dialogue. Pete and Lucy are two people having sex. Real sex. I can talk about his thick erection and I can make note of Lucy’s hot, wet sex, but these details stay the heck out of the dialogue.

The author of the book I’m reading does not always care for this convention. Instead, the previous scene would begin like this:

Pete would never say that. If Pete did say shit like that, I would ban him from making appearances in my books.

When I’m reading dialogue I want to believe it. I try to reflect this in my stories, and I think I usually pull it off. This book I’m reading, which shall go unnamed, is actually pretty hot. But seriously, I pull this quote directly from the story, where one guy is watching another one fuck a woman. He’s speaking to her, I presume:

“How hot is this, watching his thick rod piston in and out of your tight cunt?”

Really? His thick rod pistons? Who says that? Show me, instead!

“God, this is so hot,” he said, watching Pete’s thick rod piston in and out of her tight cunt.

Goodness. Pete is getting a lot of action this morning.

Filed under Book-speak, Musings and Reflections

This is all very interesting…

My entire book has become insanely different then it was during my first draft.

This is my first novel. I’m a published author (print, even!), but most of what I write is the non-fiction variety… articles, reviews, etc. So, this novel writing business is new to me. And the entire process has been quite enlightening.

So in spite of about five million unforeseen problems and unrelated adventures that have come up this month, I’m still hoping to have the first book available by late July. Yay!